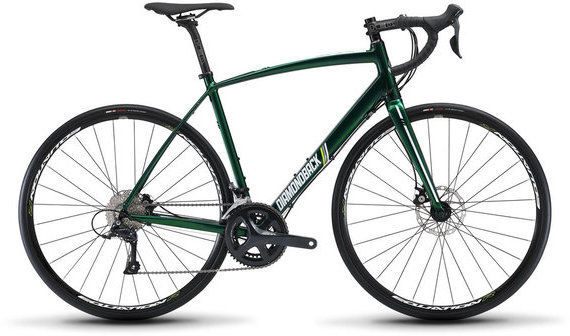 The Century 2 combines cutting-edge technology with a competitive component mix to deliver a bike that’s long on performance and short on dollar signs. The heart of this bike is its custom formed and butted aluminum tubes. Those tubes aren’t simply stylish; they also provide you with the perfect balance of weight savings and strength.

Next, Diamondback laid out those tubes using their Enhanced Performance Geometry as a blueprint. While traditional road bike geometry stretches the rider out in as low and long a position as possible, the Century models feature a slightly taller head tube and slightly relaxed head angle, both of which place you in a riding position that is still plenty fast and “aero,” but upright enough to be sustained on those long rides.

The Century 2’s components are equally up to the task. Tektro disc brakes and an 18-speed Shimano drivetrain are absolutely uncommon at this price.

* Subject to change without notice.